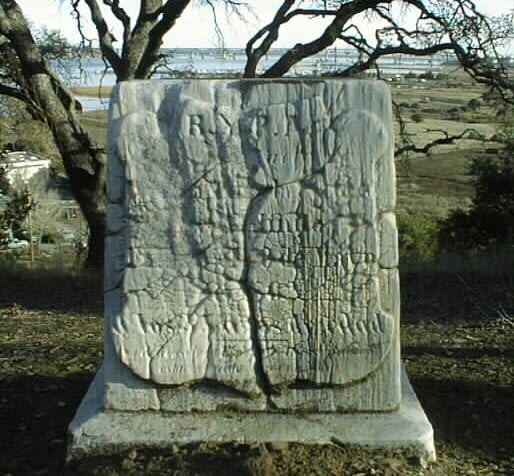 This weathered and eroded headstone found buried near this site is believed to be the grave of Don Juan Salvio Pacheco, founder of Concord, and his wife, Juana Flores Pacheco.

Don Juan Salvio was the original land owner of the town of Pacheco. He sold the land to William Hale, Harris Fassett and Dr. Carothers in 1860. When the floods and droughts caused damage to the Pacheco shipping port, he co-founded the town called Todos Santos (Concord) along with his son Fernando and his son-in-law Francisco Galindo. They offered some lots for $1.00 to entice Pacheco business to relocate to Todos Santos.

The Pacheco family insisted the official name of their community was Todos Santos (All Saints). Even though Fernando Pacheco protested the name of Concord, the Contra Costa Gazette heralded the new name on April 17, 1869.

When he was 70 years of age, a young woman named Eliza Clayton Clark asked on behalf of her parents, and the Clayton town’s people, to sell them 2 1/2 acres of knoll for a cemetery. The town had asked before, but he told them the land was not for sale.

After a lengthy conversation with Eliza, he did not sell the land but donated it with the stipulation that he and his family could be buried in the cemetery (Live Oak) for free. However, none of the family ever took advantage of the free plot.

The May 12, 1860 Morning Call made a very bad mistake when they listed Don Juan Salvio Pacheco as dead. The man who had died in Monterey was Don Francisco Perez Pacheco, who was credited with the wealth of Salvio Pacheco in the story. “You have gotten things slightly mixed, Mr. Call. The Pacheco who owns “large tracts of land near Martinez” and after whom Pachecoville was named, is not dead — at least he looked like anything but a corpse when we saw him in our streets a day or two since.”

Don Juan Salvio Pacheco passed on August 8, 1876 in his home in Concord.