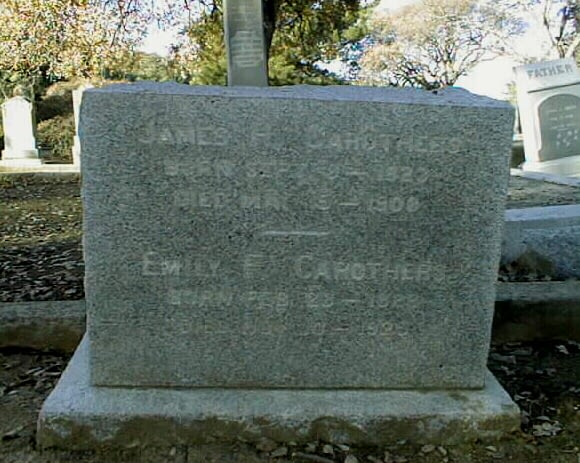 Emily and James were married in Ohio on October 25, 1849. They were the parents of Leanora, Elisa and Helen.

Emily Carothers brother, William C. Prince, came to California in 1849 and resided with their uncle, Elam Brown. He then purchased farm land in 1853, and left his uncle’s home in Lafayette to live on his land in the spring of 1854.

Dr. J. H. Carothers originally came to California via the Isthmus of Panama in 1852 and visited many parts of the state before deciding that Contra Costa County would be his future home. He returned to California in 1854 with his family, his wife’s mother, Sophronia Brown, and established a medical practice.

In 1860 William Hale and Harris Fassett, with Dr. Carothers, purchased a site (Pacheco) from Don Salvio Pacheco and proceeded to lay out town lots. Already on the property were the residences of G. L. Walrath (1853) and W. K. Hendricks (1857). Walrath built a warehouse for his firm, Lanthrop, Fish & Walrath and W. K. Henricks started a flour mill.

Pacheco was surveyed by J. B. Abbott. Hale and Fassett built the first house (a long store) about the same time Ludwig Anderson erected his. In 1860, Elijah Hook built his brick house and J. H. Troy erected his fire-proof building. Before long, others came in, lots were sold, and Pacheco became prosperous with its excellent shipping port. However, a series of events occurred to make Dr. Carothers move back to Martinez.

On the advice of a neighbor, Dr. Carothers built his office out of concrete blocks for fire safety. On August 11, 1860, the entire town almost burned, and Dr. Carothers’ office burned along with all those on his block.

In the Great Flood of 1862, heavy rains caused a great amount of silt to be deposited in the shipping channel. This was due to the extinction of native bunch grasses from large scale cattle grazing and clearing the redwood forests for lumber and firewood. After the mega flood, cargo ships could no longer reach Pacheco’s wharves.

After that, Contra Costa County experienced three years of drought followed by heavy rains. The drought had caused extensive damage to the wheat crops and a large loss of cattle. The heavy rains in 1865 caused more silt to deposit in the shipping channel.

In January of 1869, Dr. Carothers put an ad in the Contra Costa Gazette stating that, “The Pacheo Drug Store is now being fitted up and made adequate to the wants of the surrounding country. A careful and competent clerk will be in attendance. Goods will be sold at regular Living Prices.” We found out later that his office was in the same building.

At the same time, free land was offered to the Pacheco residents by Salvio and Fernando Pacheco in Todos Santos (Concord). This even further destroyed business in Pacheco.

By 1873, it was impossible for ships to enter the Pacheco port and people began to leave for Martinez. In 1874, Dr, Carothers moved back to Martinez and remained in his home until his death.

Dr. Carothers practiced Allopathic (modern) medicine and held several official appointments which allowed him to practice extensively throughout the county.

On September 12, 1863, an I.O.O.F. (The Independent Order of Odd Fellows) Lodge was organized in Pacheco and Dr. Carothers was Warden. The I.O.O.F.’s command is to “Visit the sick, relieve the distressed, bury the dead and educate the orphan.

Dr. Carothers was appointed the County Coroner on August 29, 1866 and held it through 1869. In 1869, he was elected to the State Legislature upon the Republican ticket.

In 1881, Dr. Carothers had his large building on Main Street in Pacheco taken down and shipped to Tulare City, where he had it reconstructed. The December 18, 1881 Contra Costa Gazette reads, “It affords three handsome and convenient stores on the ground floor, three offices of good size and a large hall above, all well rented and occupied.” The paper continued by stating they were pleased that Dr. Carothers’ business was successful and profitable.

On January 28, 1882, tragedy struck the Carothers family. His brother, Dr. J. A. Carothers (who had recently come from Ohio), died in his hotel room around noon. He was under the influence of opiates and became unconscious with his head falling into a pail of water. The coroner described it as an accidental death.

In 1907, he published his autobiography, Early Days in California: Memoirs of Dr. J. H. Carothers, where he speaks of his early years, travels via the Isthmus of Panama, physicians, and impressions of San Francisco. His memoirs are in the Bancroft Library of U. C. Berkeley and are offline (at this time) due to COVID-19 restrictions.