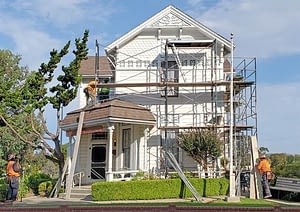 Join Us – Make a Difference for Martinez 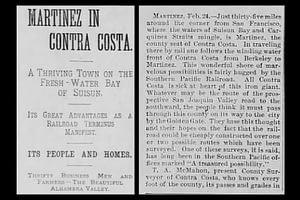 Fran Hammond Recollections, Including a Childhood on Granger’s Wharf

Frances Mary (Gianno) Hammond, a fourth-generation Martizian, was born in Carmel Valley at the Peninsula Hospital on January 7, 1937. Her father, Pietro Gianno, was born in Tropani, Italy on February 15, 1903. He came to the United States via Ellis Island when he was 18 years old, taking a train to California to stay with cousins in Pittsburg and Monterey. He chose Monterey to live and immediately started fishing. Like many fishermen at the time, when the seasons would change, he would come to Martinez to fish the strait. He would also periodically go to Alaska to fish their waters.

It was in Martinez that, through cousins, Pietro met his wife, Laura (Chantri) Gianno. Laura was born at home in Martinez at 134 Berrellesa and this house still stands today. Pietro and Laura courted for a bit and then married in Reno on March 2, 1936. Initially they lived with cousins in Monterey and even bought a house there. Then, when the fishing season changed, the young couple moved back to Martinez with their baby Fran in tow, and stayed with Fran’s grandmother and grandfather. Eventually, when it was no longer legal to fish the strait, Fran’s parents invested in a bait shop, Gianno’s Bait Shop, on Alhambra and Escobar. They would sell not only bait, but crab, various fish and shrimp to the Martinez residents.

Fran spent her first- and second-grade years going back and forth from Martinez to Monterey. As her parents had no car, the family would take the train to San Francisco and then hop on the ferry across the Bay to Oakland, where they would catch a train and arrive in Martinez. They rented a house from her grandfather at 108 Berrellesa, on Granger’s Wharf, and this house also still stands today.

Fran’s brother, Leonard Gianno (who speaks fluent Italian as well as English) was born in Martinez Community Hospital and currently lives in Green Valley in Fairfield. When he was just five years old, he started fishing with his father in Martinez, even accompanying him to Alaska when he was older. Eventually Leonard got his own boat and then owned his own title company in Fairfield.

Fran’s sister, Maria (Gianno) Brown, was born in Monterey and is now deceased. She lived in Martinez all of her life until, when her husband retired, they moved to Penn Valley. She died eight months later.

Fran attended all Martinez schools after second grade and graduated from Alhambra High School in 1955. She has wonderful memories of her high school years, when she was a cheerleader and very involved in all that high school had to offer. She worked her senior year at Western Title on Court Street, attending school for half a day and then working half a day.

She met her husband-to-be, Ray Hammond, while in the 9th grade. Ray’s dad was in charge of the boilers at the cannery and Ray attended AHS until 11th grade, and then went into the service (Army) and was stationed in Hawaii. He and Fran wrote many letters while he was away and when he was discharged in November 1956 he went to see his parents in Modesto and then returned to Martinez to see Fran. Ray’s brother Eugene Hammond was a prisoner in the Korean War and was released in 1953. Martinez honored him and had a welcome-home dinner at Paul’s Place. This was a great honor for the Hammond family.

Fran and Ray were married at St. Catherine’s in Martinez on March 3, 1957 and had their reception at Carpenter’s Hall on Alhambra Avenue. Her Uncle Nick (nephew of Paul Pagnini) catered their wedding. After a honeymoon in Monterey, they moved to a small rental in Modesto for about one year. Fran became pregnant with their first daughter, Lisa, and gave birth on February 13, 1958 at Martinez Community Hospital. Initially they were staying with Fran’s parents, but found a small apartment on Pacheco Boulevard. However, the landlord was making wine in the basement and the fumes were fairly overwhelming, so the young family moved again, to Teresa Avenue (off of Shell), where Fran gave birth to Christina on December 2, 1959.

In 1960 they moved to yet another rental, on Castro next to their cousin’s, which was Paul’s Place. It was here that their third daughter, Stephanie, was born on August 10, 1961. From here they moved to 702 Arlington, a home which they purchased.

Most of this time Ray was working on the waterfront in Martinez, building fire trucks for Coast Apparatus, which eventually became Grumman Corporation. He and Fran had the wonderful opportunity during this time to drive one of the fire trucks he built to the International Fire Chief’s Convention in Seattle. Quite an adventure.

Moving a few more times, they eventually settled on Haag Road, where they live to this day. During much of this time, Fran was working for Western Title or at the Martinez County Hospital in the Admitting Department, from which she eventually retired in 1994.

Fran loved Granger’s Wharf and wouldn’t trade her childhood there for anything. Her family’s home was constantly filled with other family members and neighborhood friends. The Scolas and Pellegrinis lived nearby and the children all played together. The Marazzanis had a boarding house where Merchant Marines stayed during that time.

Fran’s family lived very near the cannery and she remembers her grandmother telling her to grab any fish that fell off of the conveyor belt and bring it home. On Saturdays, her uncle and aunt came from Pittsburg. Her grandmother got up early and made hot dogs and soup as well as the dough for chivada (this dough today would be pizza dough). Then on Sundays, the grandmother made homemade noodles, spaghetti sauce and green beans and all of the family came to eat in the huge dining room.

Christmas was another time when all of the family gathered together. After midnight mass, there was sausage and poker until the wee hours.

Fran’s family was very close and always was open to welcoming another person. Although her mom worked hard waitressing at Paul’s Place, she found time to have fun and periodically sang with a band that performed at Nick’s Place. Most mornings would find extra folks at the kitchen table at Fran’s parents’ home, having coffee and chatting before the day’s chores began.

Claey’s Feed Store, which was located where Berrellesa Palms is now, was another favorite spot for Fran and her cousins and friends. There were grain barrels and pickle barrels and the children always felt welcome.

Summertime play was magical, as Fran and her friends stayed out late on the warm nights. During the day they would go to Rankin Park, start a campfire among the trees and bring a picnic, and in the evening they would watch baseball from the hills. Fran’s aunt played on a local team that also featured Eva Scola, her cousin and aunt of Dave Scola, City of Martinez Building and Construction Director.

Fran’s life now is considerably more quiet, but also filled with family. She and Ray have six grandchildren and nine great-grandchildren, and she still plays bocce, as she has been doing for over twenty years. She and Ray have become the “hub” for family gatherings that her mother and grandmother once claimed.

The recipe Fran submitted is a family favorite, and one requested at most gatherings.

Place garlic and parsley in a two-quart saucepan.

Completely cover garlic and parsley with a layer of vegetable oil.

Heat until garlic is golden in color.

Cover entire mixture with a good layer of pepper.

Add a pinch of salt.

In a separate pot, cook angel hair spaghetti. Once the spaghetti has reached desired tenderness, prior to draining it, measure 1 cup of water from the pot and place it in the bowl where pasta and clam sauce will be mixed.

Place spaghetti in the bowl with the cooking water. Add half of the clam sauce, add more pepper, mix.

Parmesan can be added at this time. This is optional.

Cooking time approximately 45 minutes, serves 6 to 8. French bread and salad and you have a great easy meal.