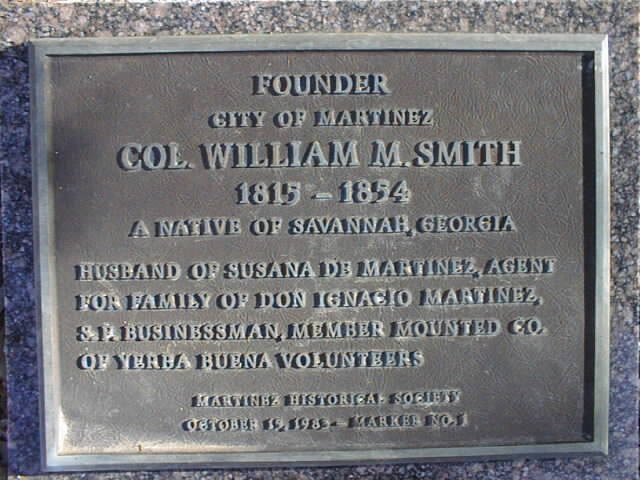 Editor’s Note:  This post was written by Historian Charlene Perry, and was printed in the Martinez News Gazette June 1981.

It was in 1849 that the heirs of Don Ygnacio Martinez, through their agent and brother-in-law, Col. William M. Smith, commissioned Thomas A. Brown to survey for a city on the west bank of El Hambre Creek (Alhambra Creek), an area that encompassed some 120 acres that extended to what is now G Street.

Colonel Smith had joined the Martinez family in 1848, marrying Susana, young widow of Capt. William S. Hinkley, ship-owner and member of the business community of Yerba Buena (San Francisco), who had been killed in a fall from a horse two years earlier.

Evidently deciding to turn over a new leaf, his first job, with William A. Leidesdorff, collecting hides and tallow for shipping, must have prospered, for within two years he was in business for himself with Frank Ward, for whom our Ward Street is named, and was referred to as a leading citizen by William Heath Davis, noted historian of California.

Following their marriage in 1848, Dona Susana and Smith moved to Rancho el Pinole, probably following the death of Don Ygnacio, which made her an heir to the 17,000-plus acre rancho, along with 10 brothers and sisters.

By now, summer of 1848, the gold rush was on.  Traffic through the Martinez property that summer, to ferry across the Strait on Dr. Robert Semple’s flat-bottomed boat to Benicia and beyond, was tremendous.  Accounts tell of up to 200 wagons waiting for transport.  This prompted Smith to convince the family that a city should be established.  To this end he was given permission to hire Brown, son of pioneer Elam Brown, who two years earlier had settled in Lafayette.

Blocks were laid out, consisting of lots 50 by 100 feet, and sales took off immediately.  One deed at least calls for a building to be erected within six months.  At any rate, building began, with the first structure a trading post at what is now Ward and Berrellesa Streets.

It was only natural that the main street leading in to the new town from both San Pablo and San Jose, and terminating at the water’s edge, should be named for the man who began all this activity.  Smith Street it was, and though there is mention in a newspaper as early as 1893 that the street name should be changed to Alhambra, it wasn’t until 1924 that the change was actually made.

Smith, who had so prospered in Yerba Buena (San Francisco), who had changed from a ne’er –do-well to a respected man of property, who worked so hard to create a metropolis for the Martinez family, who memorialized many members of his wife’s family by naming streets after them, found himself in a business deal that went awry.  Over extended financially, in a fit of depression at age 39, he put a bullet through his head (October 1854).

Only the name ‘Smith” on a couple of concrete curbs serves to remind us today that the city’s founder ever existed.  He lies buried in a now unmarked grave at Alhambra Cemetery.